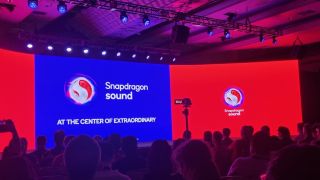 Spatial audio could be a feature of your next Android phone. At its annual Snapdragon Summit today, Qualcomm announced its next-generation flagship chip, Snapdragon 8 Gen 2, and a standout feature of that platform's updated Snapdragon Sound package is spatial audio with head-tracking.

Spatial audio is essentially a 3D audio technology that aims to make the audio of films, music and games more immersive, predominantly through headphones. It ‘spatialises’ the sound, delivering a 360-degree soundscape into which effects are placed, while the ‘dynamic’ part refers to its ability to ‘track’ and adapt the audio as you move your head.

Apple began offering its own 'Spatial audio with dynamic head tracking' through its devices and AirPods and Beats headphones earlier this year, and thanks to Qualcomm’s just-announced 8 Gen 2 platform, a variant of the technology will be available on the 2023 phones that use it.

We have been impressed with the Apple spatial audio experiences we’ve had – not least with movies. We have described it as “...stunningly effective, with voices coming from all round you, and it's predictably impossible for a stereo setup to recreate”. “It’s a much more claustrophobic and affecting experience with spatial audio activated,” we said in our AirPods 3 review. We continued: “as we move our head to the right the soundscape tilts towards the left earbud – subtly but effectively.”

So presuming spatial audio on Snapdragon 8 Gen 2 is just as effective, Android users can very much look forward to it.

Snapdragon Sound on the Snapdragon 8 Gen 2 chip isn’t just getting an update to deliver dynamic spatial audio, though. Part of Snapdragon Sound is support for aptX Lossless, which allows for truly lossless Bluetooth transmission at 16-bit/44.1kHz (CD quality) – and now Qualcomm is expanding that to 48kHz. Importantly, it is also bringing lossless transmission to the Bluetooth Low Energy standard (previously it only supported Bluetooth Classic).

And lastly, Qualcomm has also reduced Bluetooth latency to 48 milliseconds so that the time between seeing the action on your (compatible) phone and hearing it through your (compatible) earbuds will be effectively unnoticeable.

Apple’s Spatial Audio is a music revolution, but try it without the headphones

What Hi-Fi? Awards: 26 Product of the Year winners announced for 2022!

The best wireless earbuds you can buy

Becky is the managing editor of What Hi-Fi? and, since her recent move to Melbourne, also the editor of Australian Hi-Fi magazine. During her eight years in the hi-fi industry, she has been fortunate enough to travel the world to report on the biggest and most exciting brands in hi-fi and consumer tech (and has had the jetlag and hangovers to remember them by). In her spare time, Becky can often be found running, watching Liverpool FC and horror movies, and hunting for gluten-free cake.