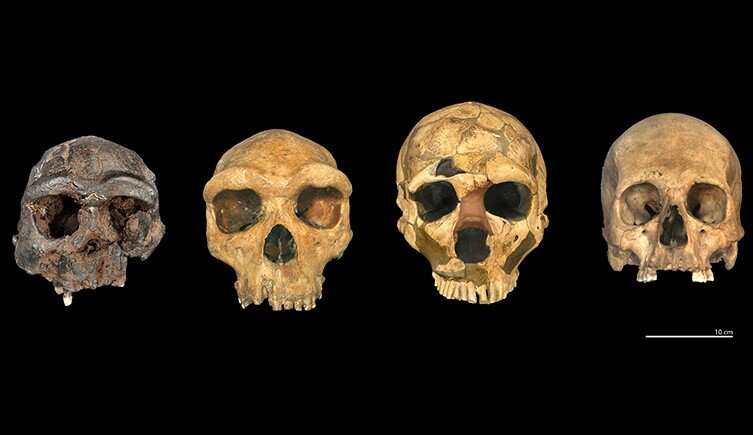 Piecing together the story of human evolution is an undeniably complex task.

However, new research has brought us closer to understanding how early humans in Britain may have been related to other European populations over 400,000 years ago.

In the 1990s, part of a lower leg bone and two fossil teeth were unearthed at an archaeological site in Boxgrove, West Sussex.

Dating to around 480,000 years ago during the Middle Pleistocene, the Boxgrove fossils are the oldest human remains discovered in the U.K. and were identified as most likely belonging to the ancient human species Homo heidelbergensis.

Scientists are now trying to determine if the Boxgrove humans belong to the same population as other early human fossils discovered at the archaeological site Sima de los Huesos (meaning "pit of bones") in Spain which date to a similar time period.

The new study, published in the Journal of Human Evolution, found that the incisor teeth from Boxgrove fit comfortably within the range of fossil teeth found at the Sima site in Spain. Therefore, they could potentially represent similar populations. However, the Boxgrove leg bone, or tibia, differed significantly from those discovered in Spain, suggesting it could be from entirely separate populations.

Professor Chris Stringer, an expert in human evolution at the Museum and co-author of the study, says, "We've got two options. First, suppose the Boxgrove incisors and tibia are from the same population. In that case, they belong to a different population than the sample in Spain because the Boxgrove tibia has more primitive features."

What is Homo heidelbergensis?

Homo heidelbergensis is a species of early human first described from a fossil jawbone discovered near Heidelberg in Germany in 1907. It's often argued that this species not only lived in Europe but also in Africa and probably Asia between 700,000 and 300,000 years ago. However, some researchers feel that the name has been applied to too wide a range of fossils from this period of time.

The discovery of stone tools more than 700,000 years old from sites in Suffolk and Norfolk shows that humans were living in Britain long before those from Boxgrove. However, the Boxgrove fossils are the earliest human remains in Britain for which there is currently physical rather than archaeological evidence. But trying to define whether they belong to H. heidelbergensis is not easy.

"The whole heidelbergensis story has become much more complicated," says Chris. "Since the Boxgrove discovery, many more fossils have been attributed to heidelbergensis and they show a lot of variation. When the fossils at Sima de los Huesos started to be found in the 1990s, they were also called Homo heidelbergensis."

"If a fossil didn't appear to belong to Homo erectus, Homo sapiens or Neanderthals, it was often placed into the category of Homo heidelbergensis. But more work has since been done on the Sima sample, which showed it was much more likely to be early Neanderthal based on physical features and DNA analysis."

Why are the fossils at Boxgrove compared with those in Spain?

The fossils found at Sima de los Huesos represent the biggest sample of early human fossils ever discovered from the Middle Pleistocene epoch.

Many of these fossils are unusually well preserved and are thought to come from around 29 separate people. Therefore, this site can reveal a lot about this population that existed about 430,000 years ago.

"Trying to piece together how human populations were similar during the Middle Pleistocene is tricky as fossils are very rare and scattered," says Chris. "It's hard to piece the evidence together when we're trying to match a jawbone from Germany with a leg bone from Britain."

"The sample of fossil humans from Spain is by far the biggest from this time period from anywhere in the world. So we can compare the two incisors and tibia from Boxgrove with the 22 incisors and seven tibiae from the Sima sample."

"We found that the Boxgrove incisors fitted within the Sima sample comfortably, and hence might also represent an early Neanderthal population rather than heidelbergensis, but the tibia did not match with those from the Sima. Hence the tibia is something different, but whether it represents heidelbergensis or something else, we cannot tell from this research." 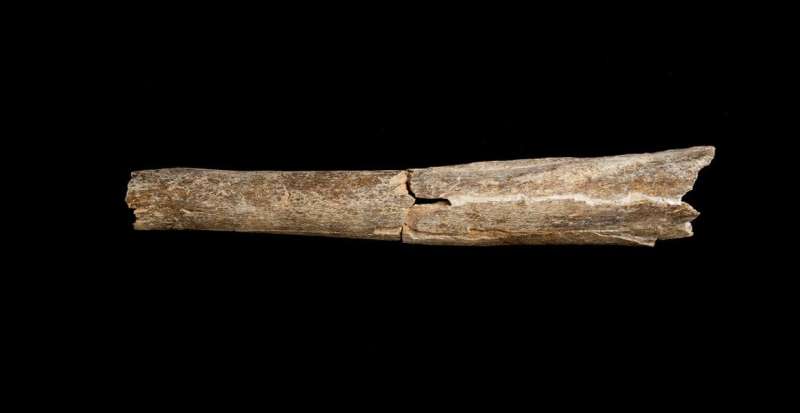 Part of the tibia of an early human believed to be Homo heidelbergensis discovered at the Boxgrove archaeological site in West Sussex. Credit: The Trustees of the Natural History Museum, London

How were the fossils analyzed?

To determine the relationship between the fossils, the team studied external features and used CT scanning for a more in-depth analysis.

Dr. Lucile Crété, Museum researcher and co-author of the study, says, "Advances in the field of 3D imaging and virtual reconstruction analysis over the last few years has helped to further our knowledge of fossil teeth and bone morphology and structure across the complex Middle Pleistocene hominin fossil record."

"CT data acquired for this study has been essential to compare the Boxgrove and Sima de los Huesos fossils and other comparative material to help make a coherent story."

Since the discovery of the Boxgrove fossils, more material from the Middle Pleistocene has been analyzed in even more detail. However, the story of human evolution and how populations were related has been revealed to be even more complex.

Dr. Matthew Pope, a co-author on the paper, says, "This research brings us a step closer to understanding how the Boxgrove people were related to other European populations in the Pleistocene."

"The picture is complex, given the teeth appear close to those from Sima and the tibia a little more distant. But we must remember that they were found in different sediments at the Boxgrove site. Establishing how separated in time these sediments are from each other is now an important research question for science to address."

This document is subject to copyright. Apart from any fair dealing for the purpose of private study or research, no part may be reproduced without the written permission. The content is provided for information purposes only.