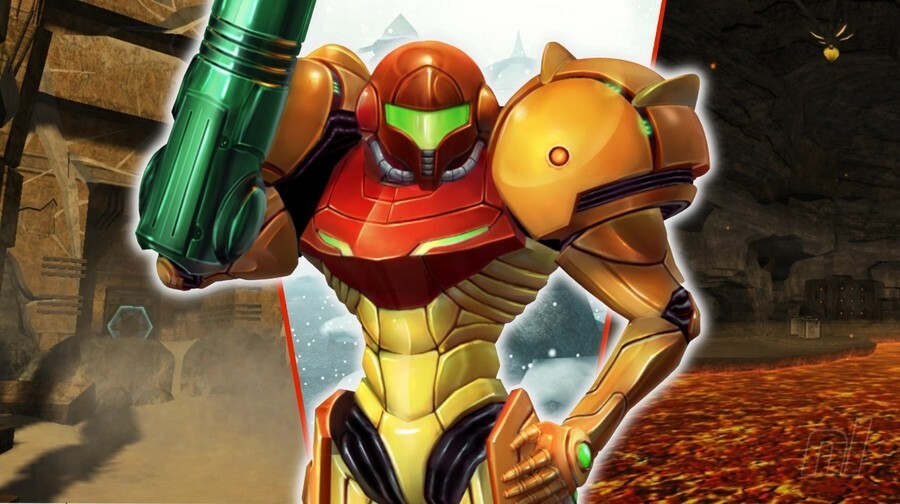 Note: the YouTube embeds featured in this article will naturally contain footage of some of the boss encounters within Metroid Prime, including the final boss. If you've never played the game, take this as your spoiler warning!

The Metroid series is well known for its incredible locations, including the likes of Norfair, Ataria, and Kraid's Lair. When the series moved into the 3D realm with Retro Studios' Metroid Prime, it introduced some of the franchise's most iconic locations, adored by fans to this very day.

With the game celebrating its 20th anniversary, we thought it would be fun to look at every main location in Metroid Prime and rank them from worst to best. We've got them all here bar a few minor locations like the Sunken Frigate. Be sure to vote for your favourite in the poll at the bottom of the page and share your favourite memories of the game (and your thoughts on our personal ranking) in the comment section.

But enough talk, let's set our visors to scan and check out every location in the masterpiece that is Metroid Prime...

Urgh, Magmoor Caverns… perhaps the only area within Metroid Prime that we actively dislike.

It looks absolutely gorgeous, but the severe disadvantage of taking damage whenever you touch the lava is a massive pain in the backside. There are also no boss encounters to speak of within Magmoor Caverns; instead, we just get a boatload of Magmoor creatures wiggling about and shooting out a load of fire. Although, having said that, blasting a stalactite from the ceiling to land on their heads is pretty darn funny. Plus, the music is pretty great.

The Artifact Temple is one of the smaller locations featured in Metroid Prime, though it stands as one of the most important, if not particularly memorable.

Visually, it’s a bit of a cross between the naturalistic elements of Tallon Overworld with the architecture found in Chozo Ruins. It’s here that Samus faces off against the iconic Meta Ridley after collecting all 12 Chozo Artifacts, and it makes for one of the coolest boss encounters of the entire game.

It’s a shame the area as a whole was so small, because we would have loved to spend more time exploring it. As it stands, it’s disappointingly constrained.

Like the Artifact Temple, Glacier One is more of a location within a location. Location-ception, if you will. [Nah, you're alright, ta. - Ed]

It’s found within Phendrana Drifts and acts as a research facility for the Space Pirates. Here you come across the iconic Metroid enemies for the first time, along with some truly brutal Space Pirate enemies.

It’s a great little location, but it comes quite low on our list due to its dependence on action over exploration; it’s essentially one major fight after another, with little room to breathe in between. Not exactly what Metroid is all about!

Tallon Overworld is the first “main” area within Metroid Prime, and as such, it’s naturally one of the most beautiful, too, showcasing the GameCube’s excellent visuals (at the time, at least). It’s essentially the gateway to the other locations in the game and serves as a good tutorial area, introducing Samus to smaller, more docile enemies.

Disappointingly, there are no major boss encounters within Tallon Overworld, unless you count the Plated Beetle, which to be honest, is more of a minor sub-boss. Points deducted!

Impact Crater is the final main area within Metroid Prime, and it's another relatively small one, but it does house the incredible titular final boss, so it's a particularly memorable one for us. There's a whole bunch of Phazon located here, the radioactive substance that plays a core role in the entire Prime trilogy, and its presence makes for some truly beautiful views.

You'll encounter loads of mutated Metroids known as 'Fission Metroids', too, and your skills will be well and truly put to the test. It's a strong end to a magnificent game.

Phazon Mines shares much of the same visual style as the aforementioned Impact Crater, but naturally, it's a much larger area, with three main levels to explore. It's crammed with Space PIrates throughout, including Elite Pirates and Omega Pirates, making this area one of the toughest in the game by quite a margin.

Once you're here, however, Samus will have powered up to a considerable degree, so it makes exploration both enjoyable and challenging in equal measure.

Chozo Ruins has a bit of a desert theme going on, with lots of sand lying about and a whole bunch of giant beetles. It’s a dense area, packed with secrets to discover and tunnels to roll through as the ever-delightful morph ball.

The standout boss encounter of the Chozo Ruins is undoubtedly the fearsome Flaahgra, though the Hive Mecha proved to be more frustrating than fun.

Speaking of fun, here's a fun fact: the Chozo Ruins, specifically the main plaza, was the first major area to be built for the game. It’s also the largest, with a total of 63 rooms. We like this one a lot!

As the opening location of Metroid Prime, the Space Pirate Frigate remains one of the most memorable areas of the entire trilogy.

Taking control of Samus after she leaps off her ship is simply revelatory, not to mention the exquisite morph ball controls. As a location, it’s teaming with visual narrative cues, from busted doors to the rotting corpses of Space Pirates.

It doesn’t overstay its welcome either, ending on a high note with a magnificent boss encounter against the Parasite Queen and a race against the clock to escape as the Frigate falls to pieces. What a great first location.

Phendrana Drifts is the best location in Metroid Prime, without a doubt. It's rare that we'd consider a snow-themed area to be our absolute favourite, but that's how good this is!

Much like the opening Space Frigate area, stepping into Phendrana Drifts for the first time is simply unforgettable. The music, the snow, the lighting; it’s just beautiful. It’s also home to some excellent creatures and boss encounters, including Sheegoth and Thardus, and some truly standout morph ball puzzles.

We could quite happily live here, to be honest, if not for the fact that we’d probably die within a few short moments. There’s always a catch.